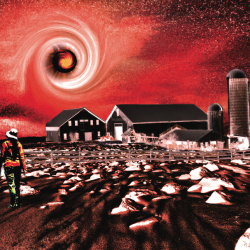 In Search of Quantum Gravity Gianamar Giovannetti-Singh explores the holographic universe Modern fundamental physics consists of two major pillars; general relativity, describing the interactions between matter and spacetime at the largest scales imaginable, and quantum mechanics, the physics governing the behaviour of subatomic particles. Despite each respective theory being tested to an extraordinary degree of accuracy, they are fundamentally incompatible with each other – general relativity predicts continuous spacetime as