Ruby Coates discusses the issue of plastic waste in science, with Martin Howes.

The issue of plastic waste is one that affects every single one of the 7.7 billion people on Earth, as well as the countless other species that we share our planet with. Globally, 380 million tonnes of plastic are produced yearly, with approximately 8 million tonnes of plastic entering the ocean each year. This problem was brought to public attention in the landmark 2017 series “Blue Planet II” narrated by David Attenborough, bringing about a change that has since been dubbed as the “Blue Planet” effect.

Raising awareness about where our discarded plastic ends up has spurred huge efforts at individual and societal levels, both aiming to reduce the amount of plastic we use. Aside from public plastic use, eyes are now turning to how waste is managed within scientific research. This is especially true in the biological sciences, which is arguably the biggest offender when it comes to single-use plastic.

As a researcher in biosciences, I display a remarkable difference in behaviour between my home and working life. In the morning at home, I diligently rinse out my yoghurt pot before dropping it into the recycling bin, carefully fill my reusable water bottle and tuck my reusable shopping bags into my rucksack. The moment I step into the lab, everything turns on its head. I use multiple pairs of nitrile gloves at least every few hours and hundreds of plastic pipette tips, petri dishes and tubes, all discarded after a single use. In biological labs, sterility is key, at the expense of everything
else. Plastic allows a convenient, cost-effective and safe way to complete biological research and also minimise chances of contamination. Unfortunately, due to the hazardous nature of this waste, very little of it can be recycled. Whilst the scale of plastic disposal has become commonplace for people who work in labs daily, it would likely horrify any outsider.

In fact, researchers at the University of Exeter estimated that 5.5 million tonnes of lab plastic waste are generated per year in medical, biological and agricultural research – equivalent in weight to nearly 50,000 blue whales. When broken down to an individual level this equates to nearly a tonne of plastic waste generated per researcher every year. Considering these numbers, it is clear that plastic waste needs to be tackled from the lab bench all the way up to an institutional level. 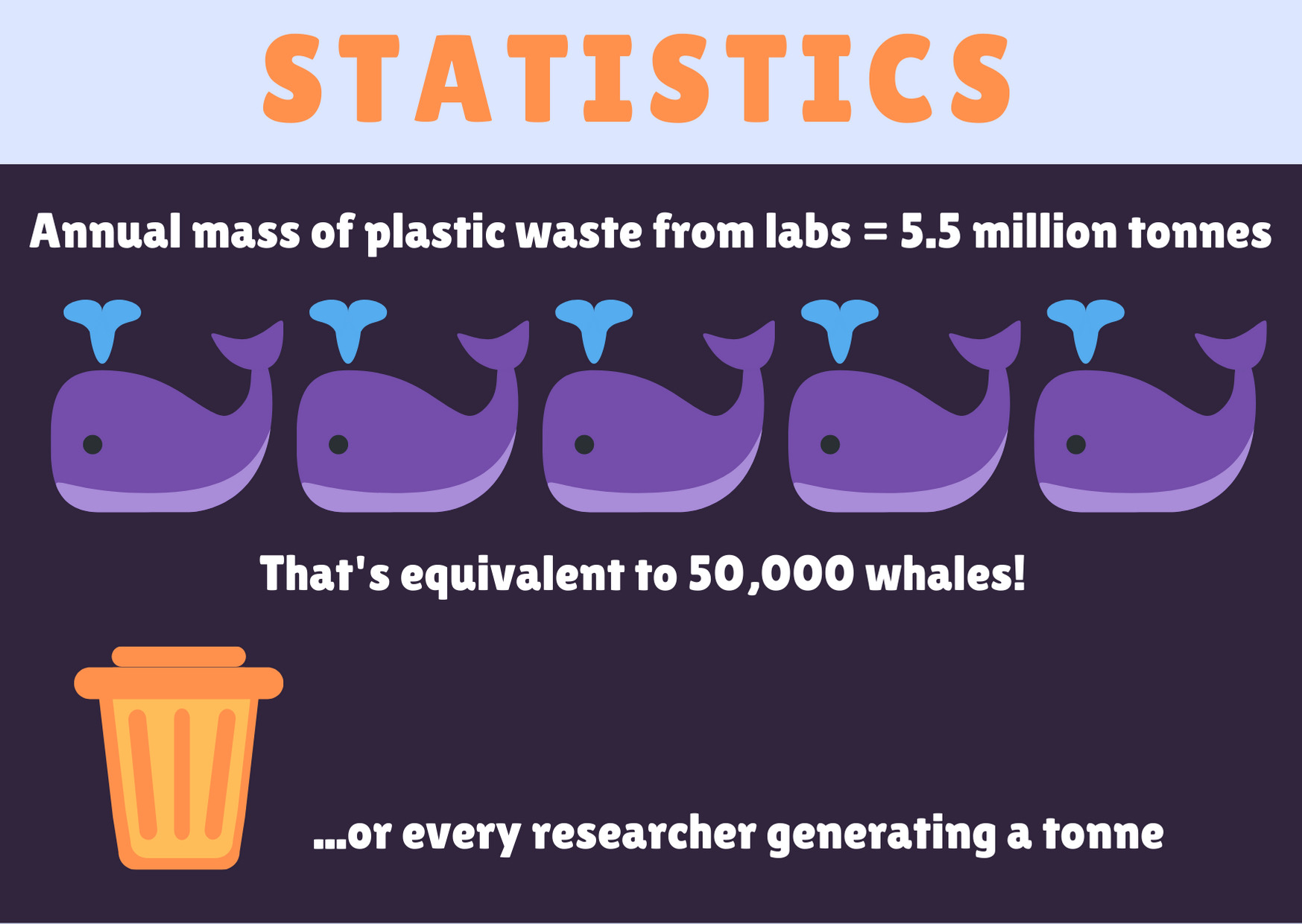 Waste management is taken very seriously at the University of Cambridge, with a dedicated Green Labs initiative to encourage researchers to actively reduce the environmental impact of their research. Speaking to Martin Howes, Sustainable Labs Co-ordinator for the University of Cambridge, it is clear that plastic is on the minds of many scientists. “Particularly in the last six months I’ve noticed an increase in enquiries from lab users across the University to find out what they can do to tackle the excessive plastic waste being generated by their research,” says Martin.

According to Martin, what matters is how bioscientists can reduce the amount of plastic they use whilst simultaneously working in an efficient, cost-effective and sterile manner. One approach we discussed is the switch from plasticware to glassware. Recently, University College London and the
University of Leeds have launched initiatives to reduce the amount of single use plastic in laboratories by phasing out single-use lab plastics and encouraging the use of alternatives such as glass petri dishes and culture flasks which can be cleaned, sterilised and reused. Similarly, the Tobacco. Exposure Biomarkers lab in the Centre for Disease Control (CDC) in the USA
has implemented a new strategy that involves washing and re-sterilising used pipette tips. The strategy has resulted in the reuse of 60% of the 11,000 pipette tips used by the lab weekly.

Aside from reducing and reusing plastic in the lab, Martin explains that researchers can also take advantage of several take-back schemes offered by suppliers such as those for polystyrene boxes, which are used to protect temperature-sensitive deliveries. An internal study conducted by Cancer Research UK (Cambridge Institute) found that the institute processed 16.5m3 polystyrene each month. This in turn drove an impressive effort to return as many polystyrene boxes as possible back to suppliers whilst promoting reuse within labs.

Martin points out that another simple way of reducing plastic waste in the lab is to opt for products from companies who are actively reducing the amount of their packaging as well as volume of plastic in their products. Indeed, the choices bioscientists make as consumers have the power to push suppliers to design products that generate less waste. One example includes DNA and RNA preparation kits from New England Biolabs, which now use up to 44% less plastic than their competitors. Encouraging plastic-conscious purchasing within the lab will make an impact, especially considering that active bioscience labs make multiple outgoing orders every day.

The nature of Martin’s role as Sustainable Labs Co-ordinator means that he is often in direct contact with suppliers about the issue of plastic waste and sustainability. “Overall, suppliers do appear to be waking up to this issue. It is a mixed bag, but I am encouraged that many are now responding positively to the increasing environmental demands of their customers. It is up to us as consumers to maintain this pressure and make sure that suppliers pay more than lip-service to these issues.”

In light of this, some suppliers have even begun developing biodegradable products that can be used in laboratories. For instance, nitrile gloves from the company SHOWA have been shown to biodegrade within 5 years. Whilst such products would be difficult to introduce into hazardous laboratories where contaminated gloves require sterilisation, those with less stringent safety requirements could adopt products such as these.

It seems that plenty can be done to reduce plastic waste in labs, but Martin points out that some of the solutions may come with their own set of issues. For example, due to the increase in single-use plastic in laboratories worldwide, resources including glassware washers and personnel to run and maintain them are likely to have been minimised. Reversion back to a greater reliance on glassware would require a significant amount of reorganisation and investment, especially in newer institutions that may not have the infrastructure to support such a movement if executed on a large scale. In addition, the amount of energy and water required to clean and re-sterilise reusable resources must also be factored in. Similarly, although take-back schemes including those for polystyrene boxes allow a second or even third life for the containers, it is important to bear in mind the environmental cost of fuel for the delivery of empty boxes back to suppliers as well as the work that is necessary to determine if the boxes are fit for reuse.

Martin therefore believes that initiatives to reduce plastic use in the lab need to be carefully designed to ensure that high quality research can be carried out at the lowest cost to the environment. He adds that sustainable research doesn’t just end at plastic waste. “There is a lot of work that must be done on improving the sustainability in lab practices. Lab spaces are extremely energy and water intensive. Increasing utility use efficiency in our labs is vital if we are to meet our carbon reduction obligations as a University” Martin says. “The threshold of what is considered the acceptable direct cost of research to the environment [is] shifting” 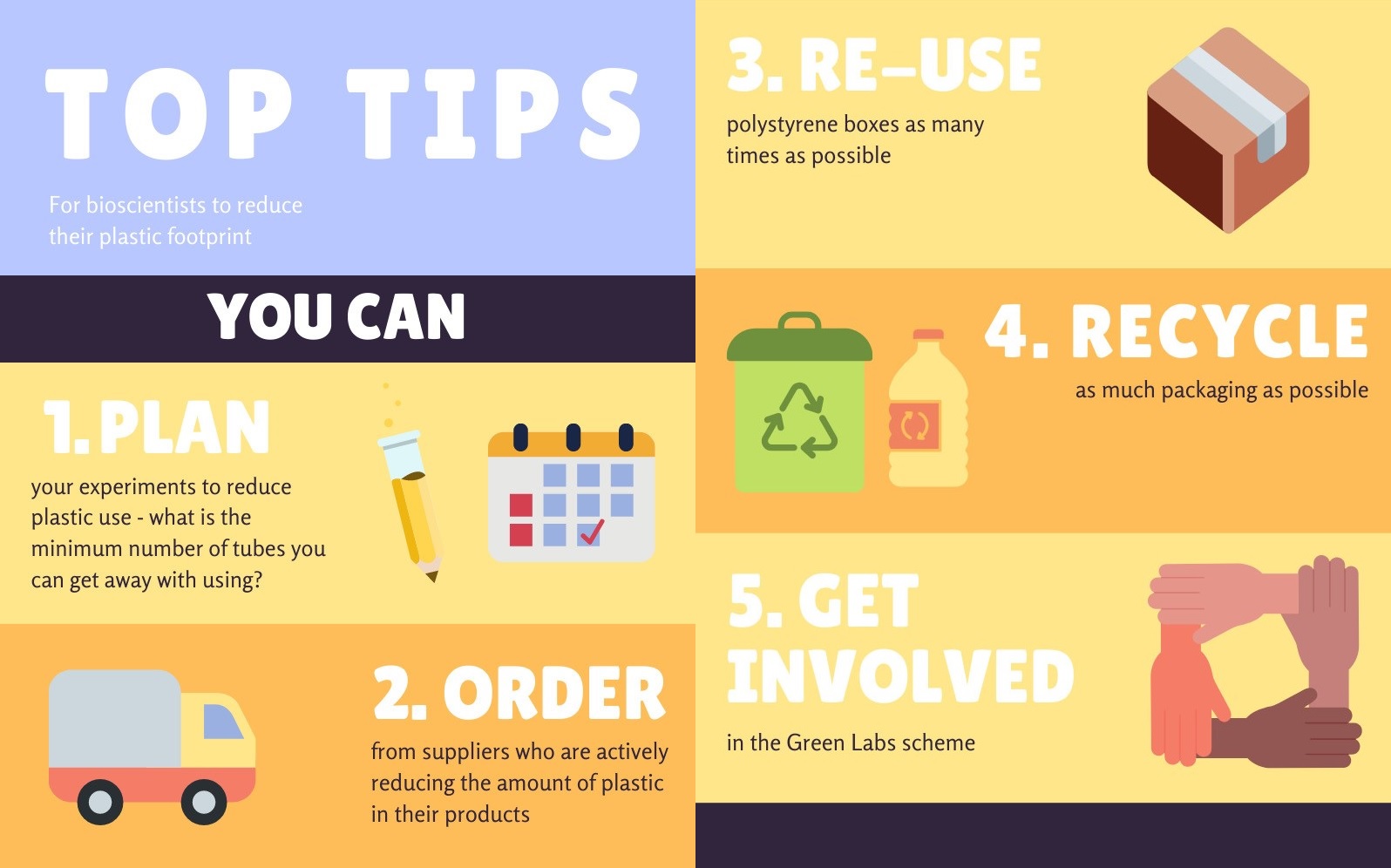 Previous Post: A Look at the Modern Interactions between Humans and Crops
Next Post: Charting the Skies, Land and Seas